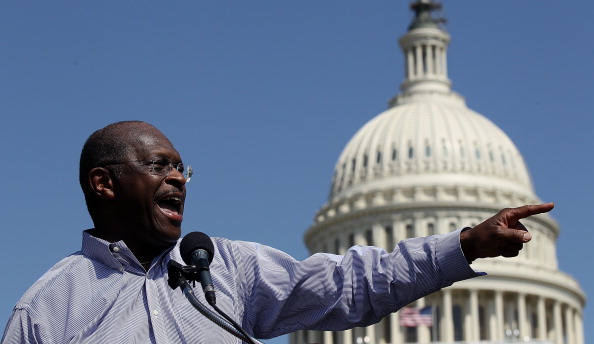 WASHINGTON, DC - APRIL 16: Former Republican presidential candidate Herman Cain speaks at the "Cain's Revolution on the Hill" Tax Day Rally at the U.S. Capitol April 16, 2012 in Washington, DC. Cain spent the day promoting his 9-9-9 tax code plan in advance of tomorrow, the day that Americans are required to file their income taxes this year. (Photo by Win McNamee/Getty Images)

*The coronnavirus has now claimed the life of former Republican presidential candidate Herman Cain. He was 74.

Reports say Cain had been hospitalized for COVID-19 in the Atlanta area. There were also reports that he been placed on a ventilator

“We knew when he was first hospitalized with COVID-19 that this was going to be a rough fight,” a post on his website said Thursday. “He had trouble breathing and was taken to the hospital by ambulance. We all prayed that the initial meds they gave him would get his breathing back to normal, but it became clear pretty quickly that he was in for a battle.”

The website posting went to say there were “hopeful indicators, including a mere five days ago when doctors told us they thought he would eventually recover, although it wouldn’t be quick.”

However, he “never quite seemed to get to the point where the doctors could advance him to the recovery phase.”

An earlier post on Cain’s website said they weren’t sure how the former chief executive of Godfather’s Pizza contracted the virus.

It’s possible Cain caught the virus when he attended Donald Trump’s disastrous June 20th rally in Tulsa, where eight members of the advance team tested positive for the coronavirus and the campaign staff had to self-isolate afterward in case of infection.