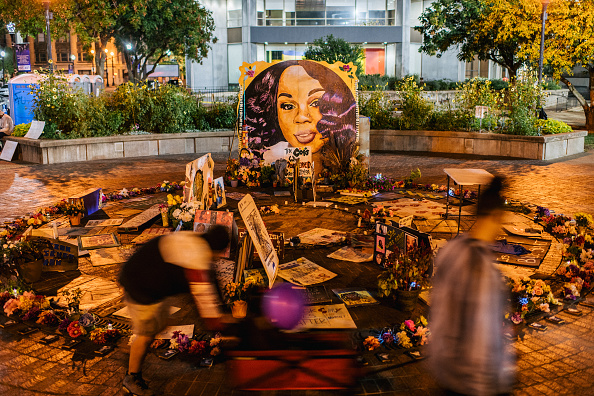 LOUISA, KY - SEPTEMBER 17: Children play near a mural of Breonna Taylor on September 17, 2020 in Louisville, Kentucky. Protestors continue to gather to celebrate the life of Breonna Taylor, at Jefferson Square Park, in front of the Louisville Metro Hall. An unofficial memorial site has been created of the park, and people spend time there while waiting for a court decision to be made regarding the officers involved in the death of Breonna Taylor, who was fatally shot by Louisville Metro police officers during a no-knock warrant at her apartment on March 13, 2020 in Louisville, Kentucky. (Photo by Brandon Bell/Getty Images)

The City of Louisville is on edge as it awaits to hear the findings in the Breonna Taylor case, and if there will be charges for the officers responsible for her death. The LMPD is declaring a “State of Emergency” in preparation for the Attorney General Daniel Cameron’s Announcement. There hasn’t been an official day or time set for the announcement, but it will come in as “breaking news” as it is being released in an untimely manner.  Businesses, restaurants and offices in the downtown area were being boarded up as of press time this evening. Here’s more from our NBC media partner Wave3 News.

The Louisville Metro Police Department on Monday announced a state of emergency as it prepares for a grand jury decision in the Breonna Taylor case.

WAVE 3 News obtained a memo sent by LMPD Interim Chief Rob Schroeder, addressed to all personnel, that read in part:

“To ensure we have the appropriate level of staffing to provide for public safety services and our policing functions, effective immediately the LMPD will operate under the emergency staffing and reporting guidelines as outlined in the Standard Operating Procedures, Emergency Reponse Plan and collective bargaining agreements until further notice.”

Earlier Monday, LMPD had canceled all requested off days for officers effective immediately. The decision came after talks among department leaders about their expectations for a possible announcement in the Taylor case being made “soon.”

For more on this story…Click Here