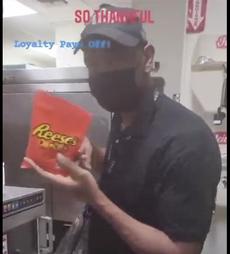 An update on the Burger King employee of 27 years who went viral when he showed his ‘goodie bag’ that he received for his years of service. One of his daughters started a GoFundMe for him that raised over $350,000. He has since been on the Today Show and as a surprise on the show he was reunited with his daughter and her three children.

The single father was able to put 4 kids through college, receive health benefits and establish a small retirement fund. He said it had been four years since he touched his grandchildren. And he is still employed at the same Burger King in Las Vegas despite job offers from across the country.

If you were him, would you stay in Las Vegas or take the job offers elsewhere?